We had a unique experience Monday evening.  We contacted the Stake Executive Secretary for an exit interview with the Stake President.  The way things worked out it was easiest for him to stop by our apartment.  So the Stake President showed up at our door so that he could interview us before we leave.  We had a great talk with him.  We discussed several suggestions and ideas about how to take care of the good marines here.  He was very complimentary and gracious.  We were so humbled to be recognized by the Stake President.  We had a wonderful chat with him and felt a good closure about our work here.  We know he cares about the military folks here and will make sure that the Stake looks after them.

Since Tuesday District Meeting was almost our last one we splurged and took all of our little district out to lunch.  It was great fun visiting with four young elders and learning about their lives.  We had some very good training.  One of the elders told a particularly touching story about why he came on a mission.  He said early in high school he was quite depressed and felt very lonely.  He had been raised in the church but did not have much of a testimony of his own.  He decided he needed to read the Book of Mormon for himself and really decide what he believed.   He said that reading brought about great changes and blessings in his life.  He found friends, his depression lifted, and he developed a testimony.  But then as a junior in high school he started spending time with some bad friends and he went into a downward spiral that led to another deep depression.  After a while he realized what he was doing to himself and that he had distanced himself from God.  He repented and changed his ways, and felt peace and joy again.  He said that his experience of repenting and claiming the blessings of Christ’s atonement were very powerful.  He wanted to be able to share the power of the atonement with others so he came on a mission.  I did not do his story justice, but it was a sweet moment and the spirit was felt strongly during his remarks.  All of us got tears in our eyes.

Quarterly the head chaplain on the marine base has a meeting for all of the religious volunteers.  Everyone gets a chance to discuss what their group is doing and the chaplain describes all the upcoming chapel activities taking place on the base.  Today was our last time to attend this meeting.  We explained to the group that our missionary service was ending and said goodbye to them.  We received a lot of nice feedback and expressions of thanks for our service on the base.  It was humbling and flattering.  We will miss these good folks.  After that we got to stop and visit several of our marine families, deliver Valentine treats, and say goodbye.  The goodbyes are sad, but we again got some nice feedback for our efforts.  Finally we went to a graduation for The Basic School and got to congratulate one of our marines.  He is a Naval Academy graduate from Hawaii.  I had fun visiting with him about the academy at our many family home evenings.  Here he is in his dress uniform. 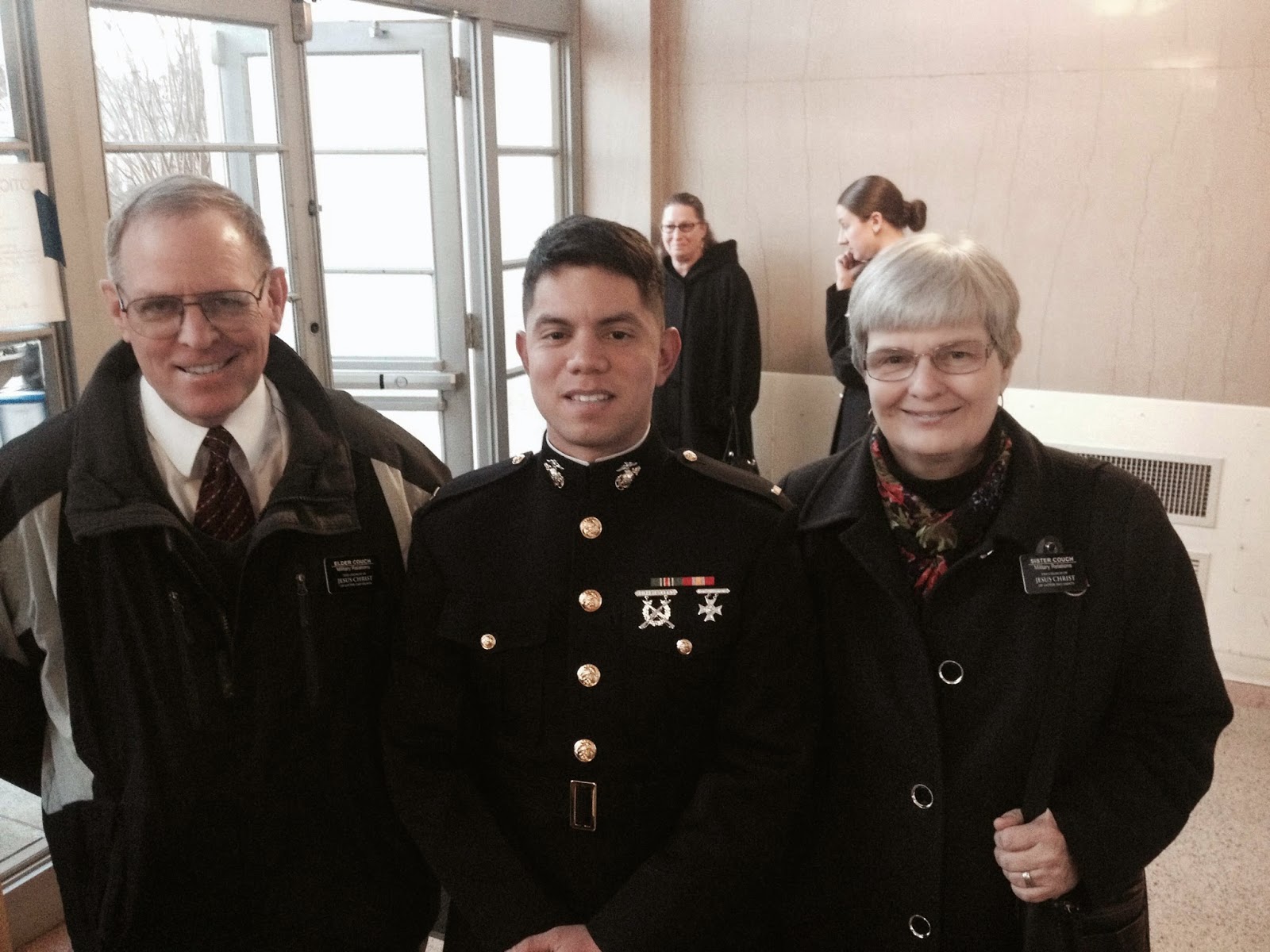 We had a wonderful going away luncheon with our friends at the Navy Marine Corps Relief Society.  It was great fun to get to visit with all of the other outstanding volunteers we work with at NMCRS. We received a nice certificate of appreciation from the President of NMCRS, a retired Admiral.  We also got very nice feedback from the Director, in red in the picture, about our service. All the other volunteers were so nice in thanking us for our service and wishing us well.  We will really miss this group.  We were touched by the kindness of the lunch party and it made us sad to have to say goodbye to so many friends.  After the party we did some personal work at the library on the base, which is a beautiful library.  Then we took another of our bachelor marines out to his favorite submarine sandwich shop.  We had a nice visit with him, but we worry about this young man.  He had not been to church in a couple of months.  He told us he basically did not like to be out in crowds in the public.  But when we saw him at church before he was very friendly, outgoing and social.  We think it is just an excuse.  We invited him to come back to church, but we will be gone so we don’t know if it will happen.  We did have a nice visit with him and he was pleased with the Valentine Cookies we gave him. 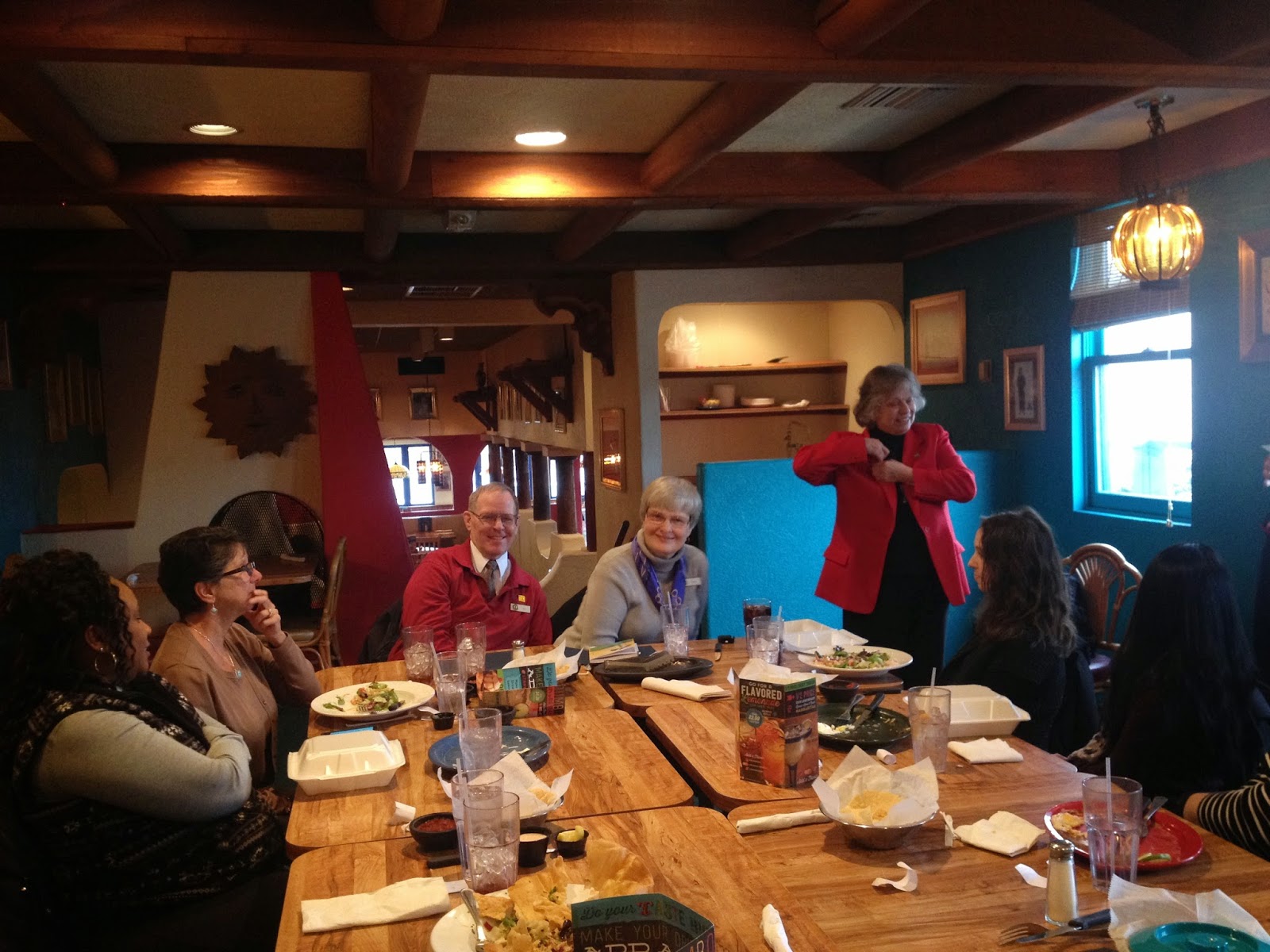 What a busy Friday we had.  We both had doctor’s appointments this morning, nothing major though.  Lezlie had to see the dermatologist and I went to see the doctor about some shoulder pain.  We then had a very enjoyable lunch with our marine that had the intestinal surgeries.  We feel very close to him because we have been with him during his whole year of difficult medical challenges.  We visited him in the hospital in DC multiple times and gave him blessings before each surgery.  He is doing really well and looked healthy and happy.  He is so changed from the man we met 18 months ago.  We talked about our shared memories of things we have done together, like the having the spudnuts on Christmas morning.  He told us of his ongoing medical board that is deciding his future in the Marine Corps.  And he told us that if the med board keeps him in the marines he is hoping to switch from helicopter mechanic to explosive ordnance disposal – the guys that blow up things and defuse bombs.  It sounds crazy to us, but he wants to try it.  Anyway, we had a great time with him.  It would have been a really, really sad goodbye.  But then he promised us he would come to church our last Sunday when we will be sharing out testimonies.  That will be very special if he is there.  We later had a wonderful dinner at the home of one of our marine families in Stafford, VA.  We love this family and their four beautiful children.  We had a great visit and an exceptional meal.  The children were so polite and friendly.  We know that was our last visit with them, so it was very sad to say goodbye.  Finally, in the evening I went over to the hospital to get an MRI on my shoulder.  The doc decided that since it had been bothering me long enough and had not improved with anti-inflammatory drugs that she wanted to see what was going on inside.  So we shall see what is going on there.  I hope it is minor.  (Note:  The MRI showed I have a torn shoulder muscle.  Not exactly sure how I did this.  It is painful some, but they said if I take it easy on my shoulder it should heal just fine.)

One other note.  Our doctor is a lady from Iran, who is a Muslim.   She is one of the friendliest and most compassionate doctors we have ever met.  Lezlie related a conversation she had with the her in the lobby while I was back waiting in the exam room.  She told Lezlie that she had enjoyed us as patients and really appreciated our service in Virginia.  She explained that many years ago she had worked for Doctors Without Borders and had gone to El Salvador after an earthquake.  She said that there were many LDS volunteers helping with things, including medical personnel.  She said she was very impressed by how hard they worked and how much service they provided.  So she knew that we must have done good service in Virginia too.  She said she had a lot of respect for the LDS people.  It was heartwarming to hear this.

Feb 14 – Happy Valentine’s Day!  We had an outstanding Senior Missionary activity today.  We were up early and driving to Richmond.  We met at a Young Single Adult center that is next to Virginia Commonwealth University.  The host couple had set up nice Valentine decorations.  We had a nice program where each couple told the story of how they met and then shared why they came on a mission.    Lezlie and I had practiced our little talk and it went well.  We double teamed it – I talked, then she talked, then I talked.  It went well and everyone enjoyed our story about how Marvin Eggleston acted as matchmaker for us.  Here is what we said about why we chose to serve a mission.  First, we feel we have been greatly blessed in our lives.  We have experienced good health, we have a wonderful family, we have always had good homes and jobs, and we have had the anchor of the gospel.  In order to show our gratefulness and pay back a little for our tremendous blessings we wanted to serve others.  Second, we really wanted to be an example of service and missionary work to our children and grandchildren so that maybe they would follow in our footsteps.  Third, we wanted to challenge ourselves spiritually, physically and mentally by doing something totally new and different.  We knew that we would learn and grow by doing so. (AND WE HAVE!)  And finally, we do have strong testimonies of the gospel and of the divine leadership of the prophet.  He has asked for more senior missionaries, so how could we say no.  We really enjoyed all the talks by the couples and had a great time visiting with everyone during our excellent Virginia brunch – ham, biscuits, sweet potatoes and pie.  We were sad to say goodbye, especially to the couples that have been here almost as long as us.  We feel as if we got to know them really well and will miss them greatly.  Here is our group at the party. 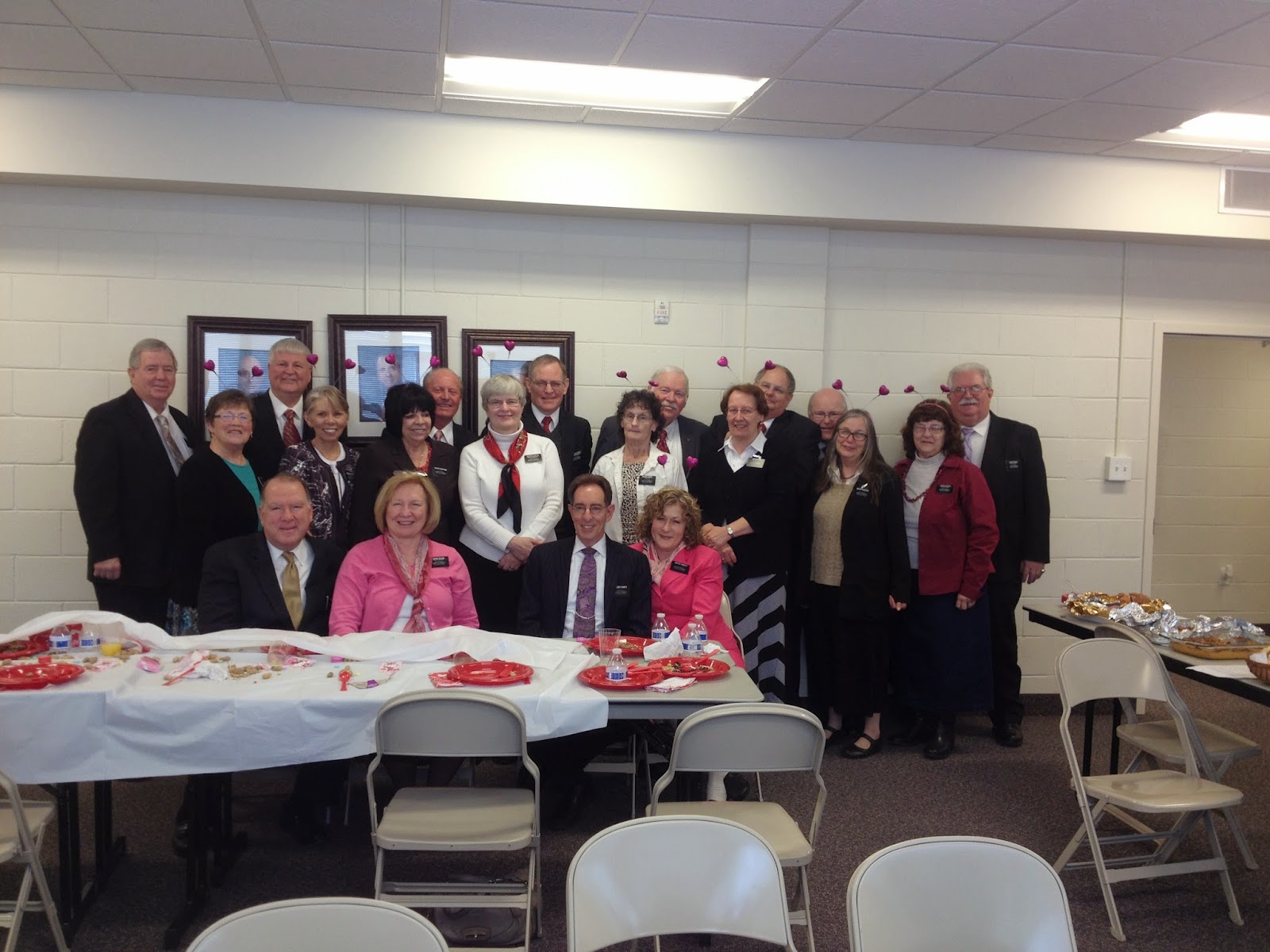 Sunday morning was supposed to be our last lesson for Officer Candidate School.  But it was not to be.  We were there all ready to present our lesson when our marine showed up and said he only had twenty minutes.  He was ordered to do field day and had to beg his sergeant to have twenty minutes off to go to Sunday services.  So we quickly passed the sacrament and fed him some bread pudding.  We spent about two minutes summarizing our half hour lesson.  But at least we got to see him and bolster him up a bit.  He also asked for a blessing, which we gave him.  He seems to be doing pretty well, but he is only at the halfway point and still has a lot of hard things to do.  Today was our second to last meeting at Quantico Ward.  Everyone pretty much knows that we are leaving soon so we had a lot of nice feedback from ward members.  We have been asked to bear our testimonies next week at the end of sacrament meeting.  That will be hard.  I will probably just stand up there and cry.  But we are also very, very excited about starting our journey home and getting back to family, friends, and home (and dogs).