A Visit to Montpelier

This week was our Stake Conference.  President Wilson, our mission president, spoke.  We had not heard this before, but in giving his talk about providing service as missionaries he mentioned that two young missionaries had lost parents while here on their mission.  They were both elders and they lost their moms.  They both chose to remain and complete their missionary service because they knew that is what their moms would have wanted.  We are always in awe the dedication and sacrifice of these young missionaries.  They are so impressive and inspirational.  We feel it a great honor to work with them.

We received permission from our Mission President to be released a week early.  Our official end date was March 1 but he is allowing us to leave Feb 23.  We thought we needed to spend more time with mother in Florida to help her get things under control there before we head back west.  We are planning to stop in Atlanta, Venice, Florida, Spring and Alpine, Texas, and Pagosa Springs, Colorado to see many family members.  Yay!

We had a good Officer Candidate School family home evening.  Our lone LDS marine was the only attendee again, but he is a really great guy.  He told us all about how hard the first week has been and we gave him encouragement and praise.  We had a good lesson about integrity and leading by example.  He loved the chocolate cake the other couple brought and ate two huge pieces and about 3 glasses of milk.  We are sad there are not more LDS students this time, or at least a few non LDS visitors.  But we know this young man needs all the support he can get, so we are glad to hold our meetings just for him.  It is pretty funny, 4 of us old folks giving a lesson and treats to this individual marine.  But it is always a privilege to work with these young OCS students.

We had a Senior Missionary activity on Saturday to tour Montpelier, so we traveled to Orange, Virginia on Friday.  Montpelier is the historic home of James Madison and it is located about 5 miles from Orange.  Lezlie has ancestors that settled in Orange County, so we decided to spend a day there doing family history research.  Well, Lezlie did the research and I did some reading and tv watching. She visited two different libraries and tapped out all the resources on the Conways.  It was a good day and she found some additional details she had not known before.  However,she did not find the big conclusive evidence about James Conway she was hoping to find.  Even though it was spitting snow we drove outside of Orange and found the land that the Conways settled- it is now a wildlife preserve that sponsors bird dog trials, a horse farm that raises endurance horses, and a large plant nursery. Orange is in the foothills of the Shenandoah mountains and the rolling countryside is beautiful, even in the winter. We saw some of the most beautiful horse farms.  We had a very nice dinner with the senior missionaries that live in Orange at an interesting local restaurant that had been a silk mill during the Civil War and WWI.  It was called the Silk Mill Grill- delicious crab cakes. This couple is going home next week, so it was fun to talk to them about finishing their mission and their plans for when they get home.  They have been here almost as long as we have, so we feel like we know them pretty well.  We talked about how hard it will be to say goodbye to the great new friends we have made here in Virginia. 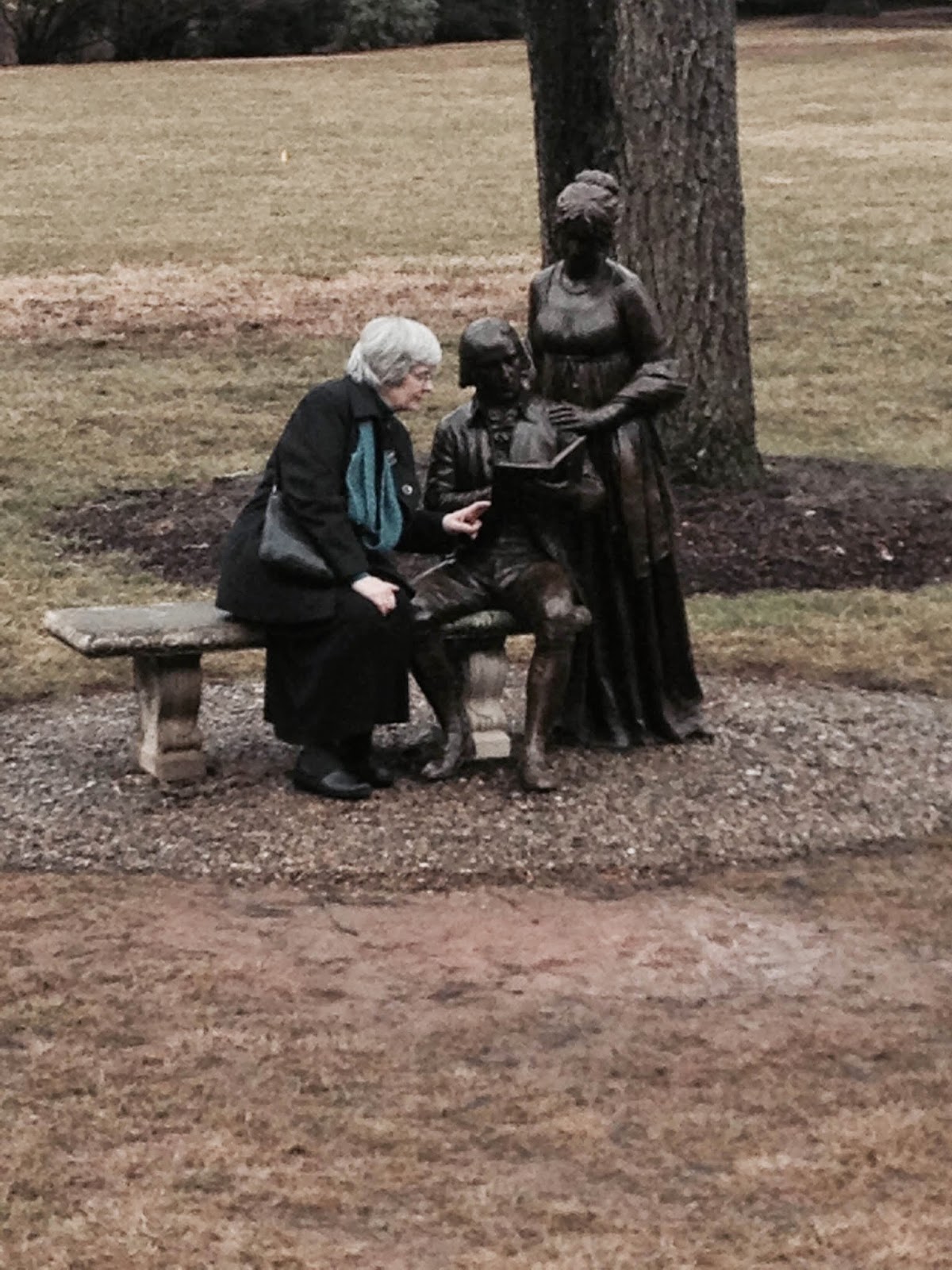 On Saturday we had a great Senior Missionary Activity at Montpelier, the home of President James Madison and his wife Dolley.  Many years after the Madisons died it was owned by the DuPont family and became a horse farm. It is a national monument now, but it still sponsors cross country steeplechase type horse shows and fox hunts. There are beautiful rolling hills with horse pastures and a view of the Blue Ridge Mountains in the front. We met at the visitors center and had a short but very spiritual meeting.  Since it may be the last time we see all the seniors we got a chance to bear our testimonies.  We talked about how much we have learned on our mission and about how blessed we and our families have been since we arrived here.  We have learned a great deal about faith, prayer, and about following the spirit.  We then got a special group tour of the mansion, and it was wonderful.  We had a superb tour leader who knew a ton of history about the home and the Madison family.  She even told a bit about James Madison's mom, who was a Conway. You might remember us mentioning that James Madison was born at Belle Grove, the Conway mansion.  He was born there because his mom went home to be with her mom when she had her first baby, James.  We stood in the room where James mom taught him his basic arithmetic and ABCs.  The guide was very dramatic and a great story teller.  So in addition to seeing the beautiful mansion and grounds we heard some great stories about James Madison, his wife Dolley, and about U.S. history.  James was an amazing man who had a huge intellect.  He studied the governments of the world in his home library for six months before the Constitutional Convention.  He evaluated why they failed and developed ideas about how to avoid those pitfalls in a government.  That is one of the reasons he was able to write most of the constitution all by himself when he attended the convention.  We had a very enjoyable day at Montpelier.  We are grateful that we have been able to see so many amazing U.S. History sites in Virginia.  We said goodbye to most of the other seniors as we may not see most of them again.  This was sad, but we are so grateful we got to know them and serve with them.  All have been wonderful examples to us.   The picture above is Lezlie reading on a bench with James and Dolley.   Below we are standing in front of the front porch at Montpelier.  Finally there is a picture of all of the senior missionaries from our mission that attended the activity. 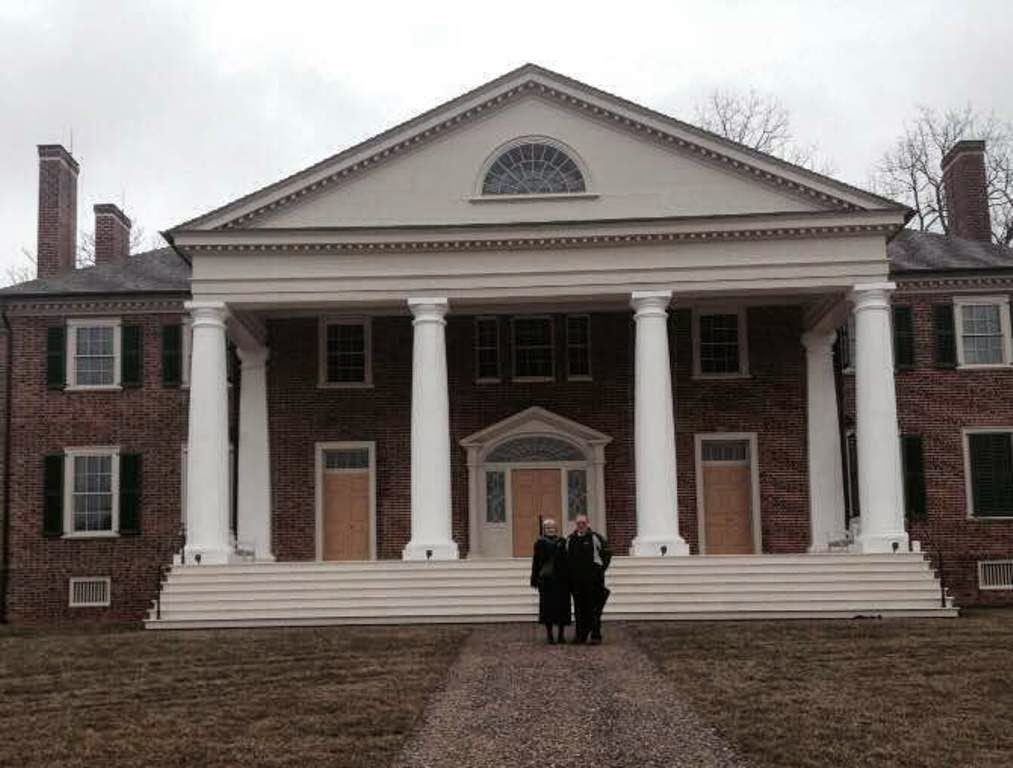 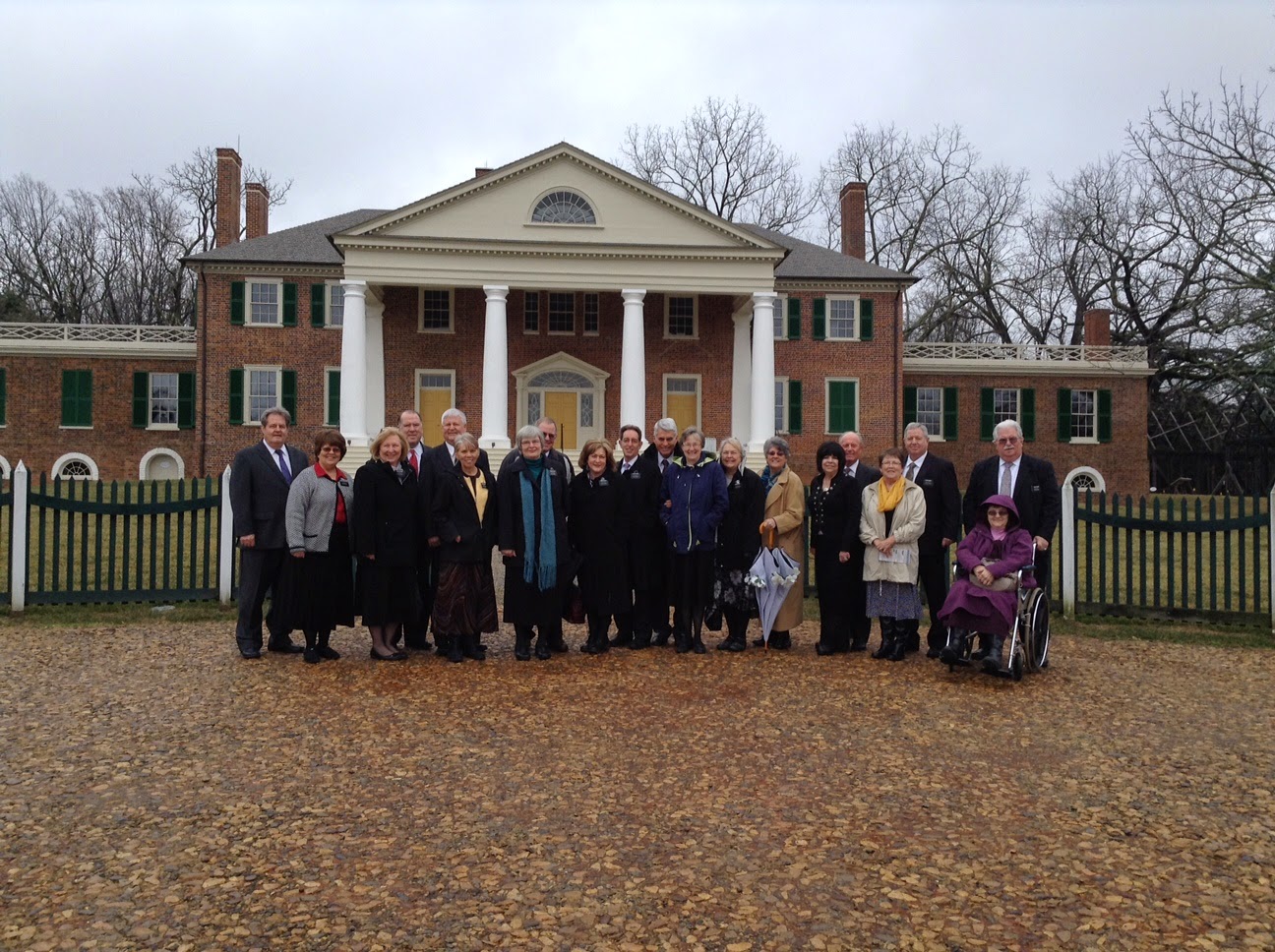 Today was a triple sacrament meeting Sunday.  We were busy!  We began by getting up early to bake muffins and get ready for our 7am sacrament service on base.  We then drove all the way to the base and provided the sacrament meeting for our lone LDS marine currently enrolled in Officer Candidate School.  We had a great discussion on courage.  We have enjoyed getting to know this young man and think highly of him.  We get to love these young people so quickly and we just want all the best for them.  I think it is part of the missionary spirit that you can develop such a love for folks so soon after you meet them.  I supposed we should try to be more like that all the time.  Next we drove all the way back to Woodbridge and attended our regular church meetings in our own ward.  Our schedule is currently 9:00-12:00.  Our meetings were excellent and we enjoyed spending time with our dear Quantico Ward family.  Immediately after our meetings we headed for the Rock Hill ward in Stafford, which is south of the base.  We met a young marine family that are not members of the church.  She is a marine at The Basic School.  We first met her at OCS where she attended our services several times.  She contacted us and said she would like to take her family to an LDS church service.  So we met her, her husband, and her two children at a ward near them.  It was a really good experience.  Their children, two and four, had never sat through a church service like this before, and they did great.  They were well behaved. Many, many ward members came up and said hello and we think they had a nice time.  We are going to wait a few days and see if they want to come again or if they want us to stop by and teach them a lesson about the gospel.  We were happy to be able to facilitate them coming to church and were pleased with the way it turned out.  Upon arriving home we both kind of collapsed for a nap.  We do not handle these early, early mornings as well as we used to.  But it was an excellent day and we were grateful to be busily engaged in our work.

Posted by Dan and Lezlie Couch at 5:08 PM