We worked a couple of shifts at the Navy Marine Corps Relief Society this past week.  A lot of the regular volunteers were out of town or had family visiting, so we filled in the gaps.  We helped several marines that had last minute money crises just before the holidays.  As usual we were happy that we could help them.  We feel grateful that we have had the opportunity to volunteer at NMCRS. 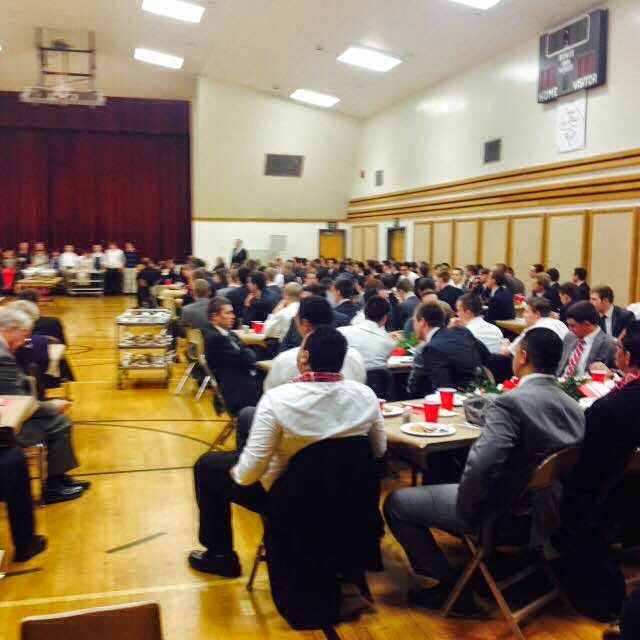 Tuesday was our all-mission Christmas conference/party, and it was wonderful.  Early in the morning we transported 4 elders to Richmond for the party.  All 280 missionaries from the entire mission were there, and it was a sight to see (2 photos).  To watch all of these dedicated young people sitting together and knowing how hard they work, how much sacrifice they have made, and how hard they are trying to be good people - well, it was just overwhelming.  Our program followed a set pattern.  Someone would give a short talk about one of the attributes of Christ, such as patience, charity, diligence, faith, hope, etc.  And then there would be 1 or 2 special musical numbers.  The talks and the music were both superb.  I told Lezlie that some of these talks could have been give at General Conference and they would have fit in seamlessly.  Most of the musical numbers were simply amazing.  We were in awe of the talent in our little mission.  Of course there were several beautiful singers, some solos and some numbers with duets or ensembles.  I had two favorites.  One was the sister that sang "Oh Come Oh Come Emmanuel."  Her voice was like a controlled opera singer, and she conveyed great emotion.  Another was a sister that sang a very interesting arrangement of "Silent Night."  Her voice was like crystal, pure and clear.  Her testimony was obvious as she sang with great emotion and tenderness.  We also had some superb elders that played instruments - a wonderful rendition of "Silent Night" on the violin, "Emmanuel" again on the organ, and then a cello solo.  There were a couple of solos and ensembles that did not have stellar voices, but their testimony of the Savior and their emotion came across strongly.  After two hours we broke for lunch.  A group of women and young people had prepared lunch for all 280 of us, and it was excellent (see pictures).  We had excellent ham, cheesy potatoes, rolls, salad, and pumpkin pie.  Afterwards we sang "Called to Serve" to the servers as a thank you.  While we were on our lunch break a couple of humorous numbers were performed.  The best one was when a very large Tongan elder played the ukulele.  His companion, who was about one-third of his size, did a very funny rap poking fun at the mission president.  The whole audience was just roaring.  It was good to see these hard working young people having fun.  Following our afternoon session we gathered in the gym one final time.  A group photo was taken, and you can imagine how long that took.  Getting 260 young people and 20 old folks lined up was not easy.  Then the mission president and his wife gave each of us a small bag of goodies for Christmas.  Also, one of the sister's family own a company called Fatboy Ice Cream.  They had sent several cases of ice cream bars on dry ice so that we could each have one.  What a special treat!  Although it was a long drive home after the party, Lezlie and all of the elders slept, we were very happy that we got to attend such a spiritual and fun Christmas conference.  It was nice to spend a day totally focused on Jesus Christ rather than on the other trappings of Christmas.  We spent the few hours left in the day making final preparations for Aaron's visit.  We are very, very excited about that. 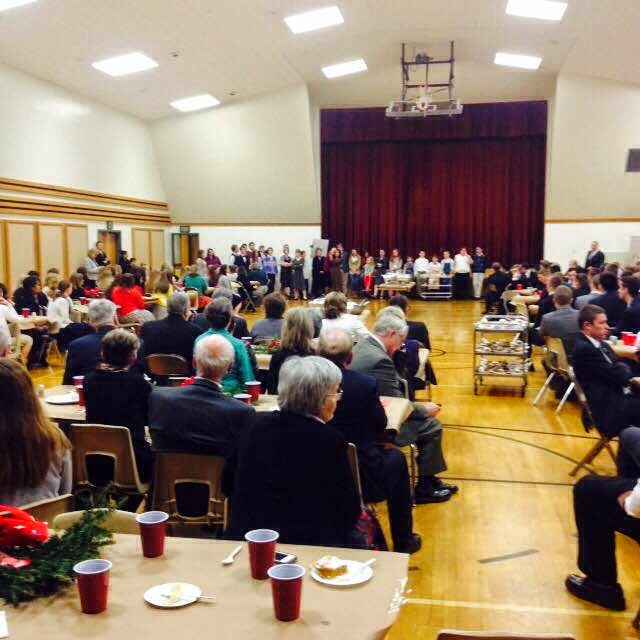 After working at NMCRS on Christmas eve we met a brand new Navy family that just arrived on base Saturday.  He is a lawyer – the Navy provides all the lawyers for the marines.  It was a very nice family.  She is a Samoan and their sons have cool names like Kiumana and Tao.  But it was also a sad visit.  This dear sister has stage 4 cancer and is battling for her life.  You would never know it though.  She was cheerful and positive.  We were glad to meet her and offer our help in any way we can.  She had lots of family their visiting for the holidays, including her parents.  So she is in good hands.  Finally we got to travel to the airport in Washington DC and pick up Aaron.  We had almost no traffic and all went well meeting him.  We were so happy to see Aaron!  We probably talked way to much on the drive home but we were just very excited to see him.  Upon our arrival at home we gave him a tour of our apartment and had some excellent sloppy joes.  We opened a few Christmas presents and had a great time just visiting and catching up.  We got to skype in to Anne and Rex’s family Christmas Eve program, which was really fun. There were many excellent performances by all of the family.  We were so proud of all of them. 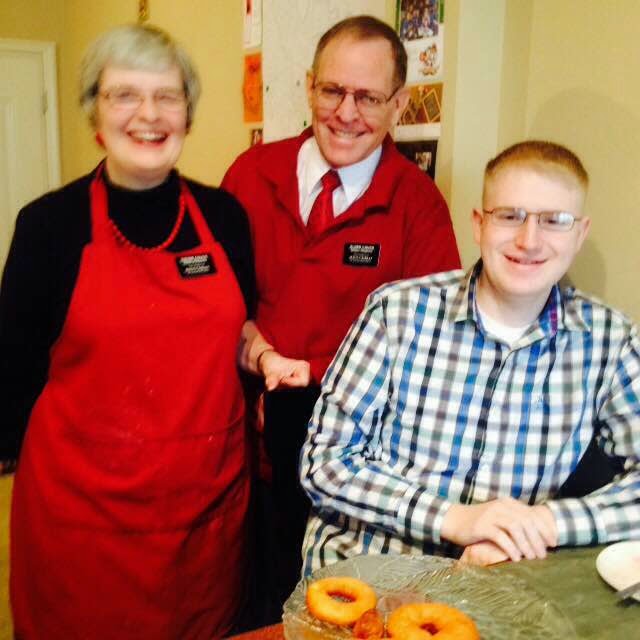 Merry Christmas!  We had an outstanding Christmas  morning.  Lezlie got up first thing and started mixing up the dough for the spudnuts for our young marine friend.  It is a complicated recipe so she was up early.  Our marine arrived just as the first spudnuts were being cooked.  He was very surprised and touched.  We could tell.  He told us many stories about his grandparents and what they did on Christmas Day, and about he and his cousins eating dozens of grandma’s spudnuts.  Shortly after he arrived two of our missionaries stopped by, the young elders from our ward.  We fed them a good Christmas brunch, and they also ate many spudnuts.  The elders gave us an excellent spiritual thought about the life of Jesus Christ and then they had to leave.  To our surprise our marine stayed for another hour and helped us finish our Christmas jigsaw puzzle.  He seemed to enjoy it very much.  But all too soon he had to leave.  We were so pleased the way the spudnut surprise went.  I think he really knows that we care about him and has come to trust us.  After we opened the rest of our gifts we took Aaron for a tour of the base.  We dropped plates of Christmas cookies off at two of the gates and the guards were very pleased.  We were able to show Aaron all over the base, which was very quiet since it was Christmas Day.  We also dropped off some toffee at one marine family home, so Aaron got to experience that part of our missionary work too.  While on the base we stopped by the Potomac River and saw lots of birds (photo below).  We did a lot of puzzling and game playing in the evening.  We also got to have an excellent group video chat with all of the family – Anne and Rex and their kids from Texas, Chris and Stacey from Colorado, and Carrie and Matt and their kids from Washington.  We really enjoyed that.  It was a quiet but very, very nice Christmas Day. 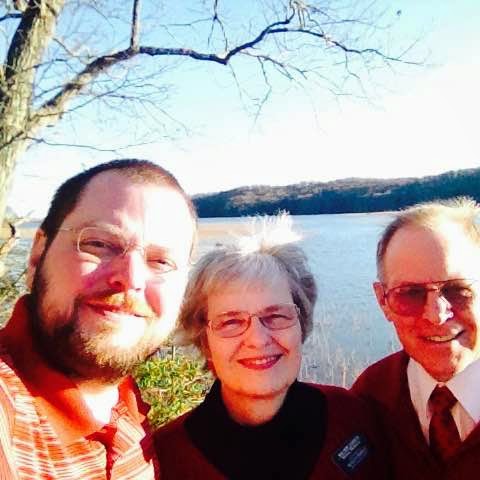 Of course the day after Christmas was Lezlie’s birthday.  Happy Birthday Lezlie!  During breakfast she opened her birthday presents and enjoyed them very much.  Throughout the day she got many phone calls and happy birthday songs on the phone.  We spent most of the day at the Marine Corps Museum.  Aaron really enjoyed it.  He did not read quite as much as Rex, but he did take his time and read most of the signs.  We had a superb lunch at the Tun Tavern restaurant in the museum.  After a couple more hours of browsing in the museum we finally headed home and worked on our second jigsaw puzzle and played some more games.  For Lezlie’s birthday dinner we went to Bahama Breeze.  We had some really good seafood, and we all enjoyed it a lot.  It was a low key birthday for mom, but we had  a great time sharing it with Aaron.  Here we are at the Marine Corps museum. 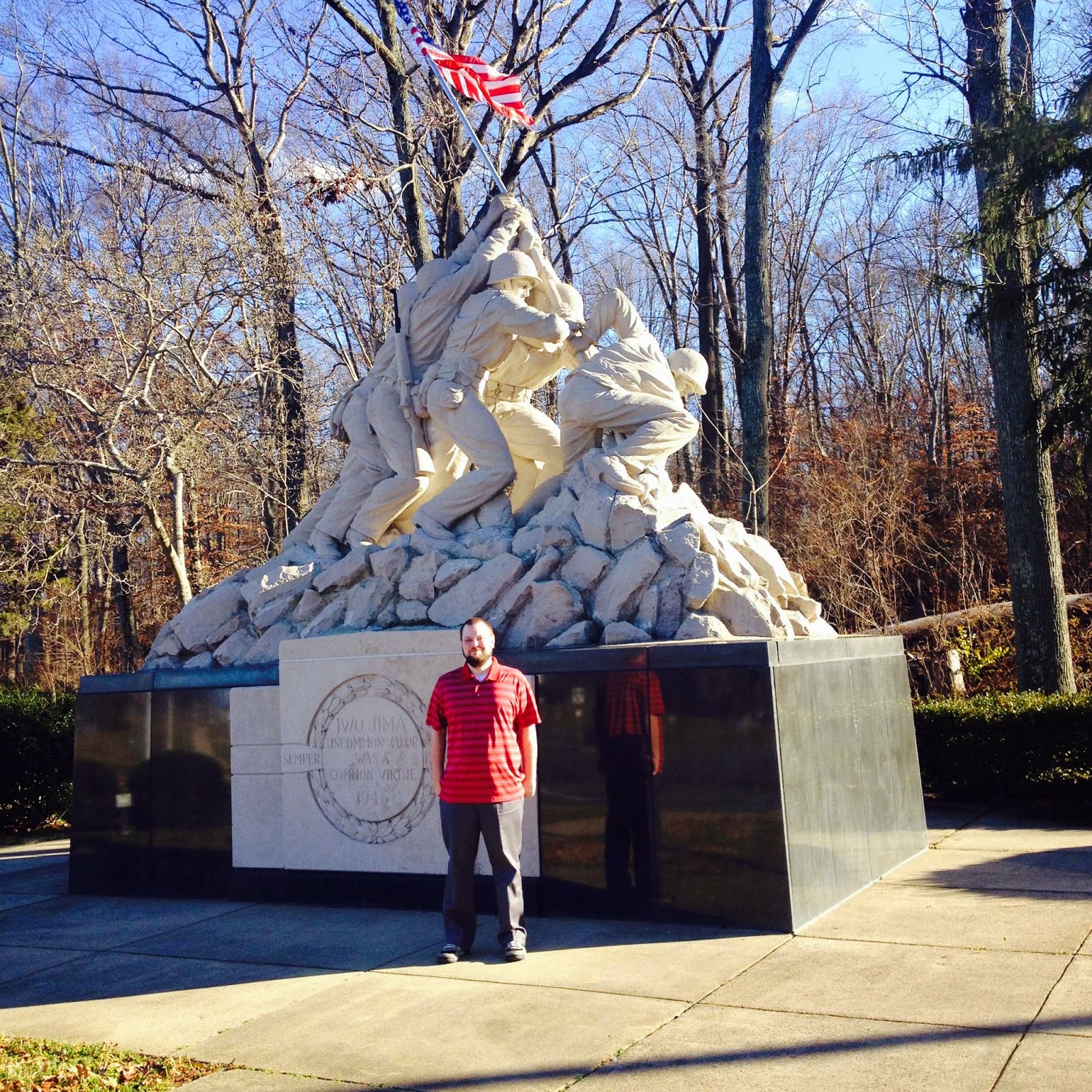 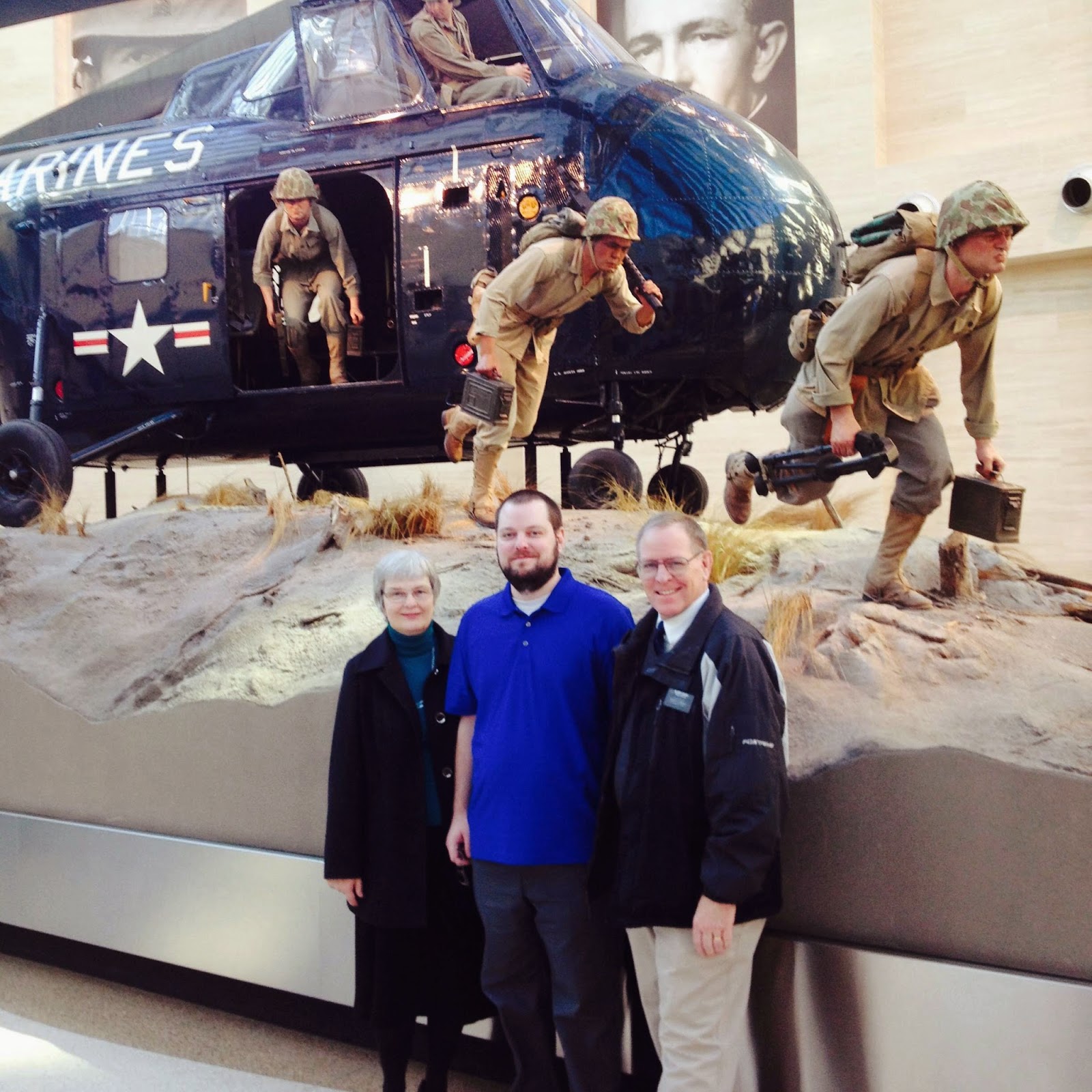 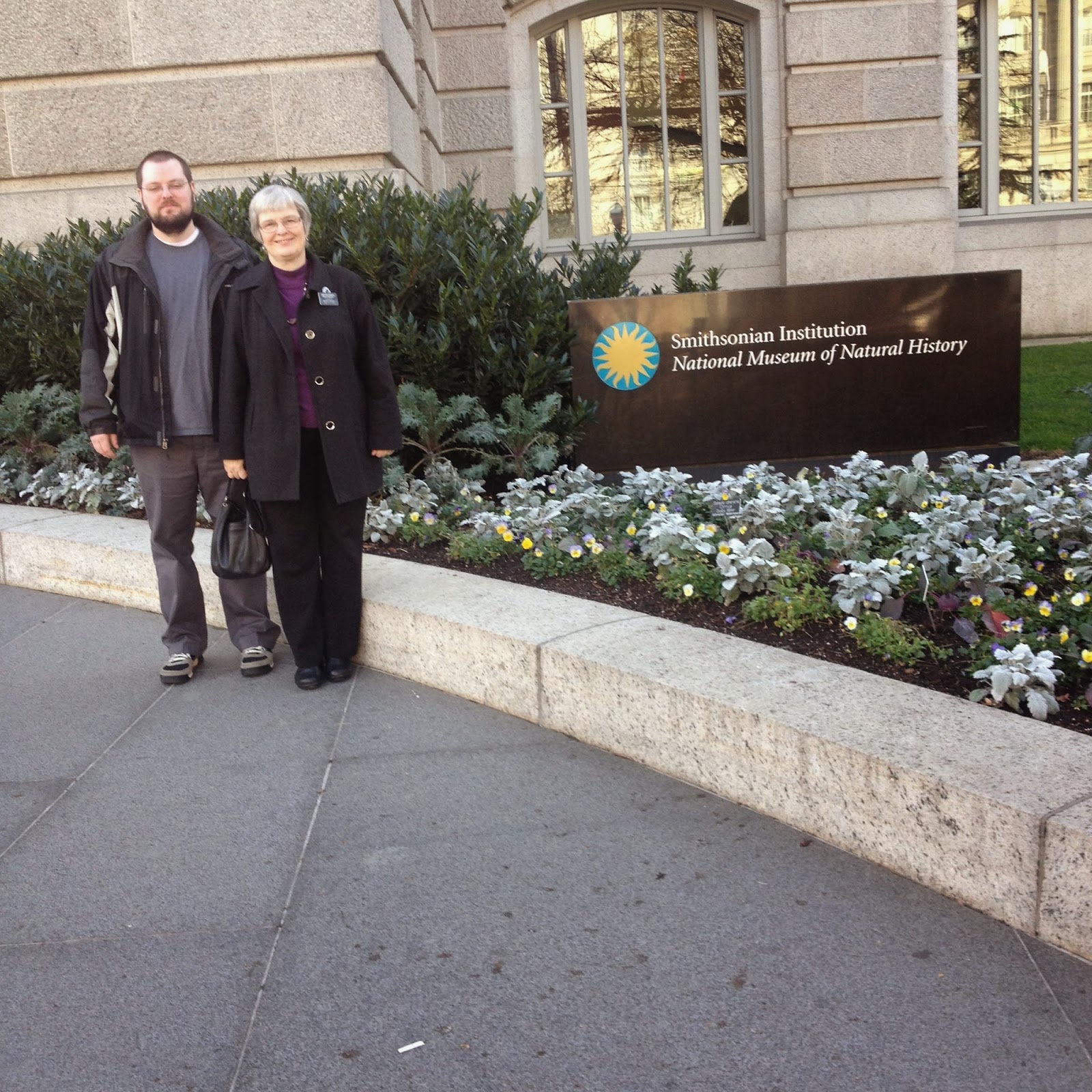 On Saturday we had a leisurely morning at home getting ready to take Aaron to DC and to the Baltimore airport.  We found downtown DC more crowded than we had expected.  It was a beautiful sunny day for December so I guess that attracted a lot of visitors.  Here are Aaron and mom in front of the Museum of Natural History.  We really enjoyed both this museum and the American History museum.  We once again were very impressed by the gem collection, which Aaron really liked too.  He saw the dinosaurs and bones as well and thought they were excellent.   In the American History museum we took our time in the transportation section and the power machines area.  Those areas were very good as well.  I suppose everything in the Smithsonian Museums is done well.  Finally our time was up and we had to head for the Baltimore airport.  We had not been to that airport yet, and it is a nice one.   It was easy to get to and not too crowded.  We had enough time for a quick dinner together at the airport and then all too soon it was time for Aaron to leave.  We had a wonderful time with him, and we think he enjoyed it too.  We feel so fortunate that all of our children and grandchildren have come to visit us on our mission.  Not all senior missionaries can claim that.  In the future when we tell stories of the things that happened in Virginia on our mission they will have a much better understanding of what we are talking about.  We were so happy to have everyone visit.


Even though we were kind of tired from all the activities during Aaron’s visit we had a busy Sunday too.  A young LDS marine from Georgia showed up for embassy guard school on Friday.  The military relations senior missionaries from San Diego told us about him.  We contacted him about 3 weeks ago and so we knew he was coming.  We took him to church today, but not to our ward.  The embassy guard school is on the west side of the base, so it is much closer for him to go to a ward in Stafford.  Besides that we are going to start an OCS class in a couple of weeks and we would not be able to give him a ride.  He was a very nice young man and made a lot of friends at the ward very quickly.  We have learned that the embassy guard school is very competitive and only excellent marines get selected to attend.  This young man was no exception.  He was bright and well spoken, and we really enjoyed him.  After a short rest at home we attended one last Festival of Lights concert at the temple.  We took along our friend Will.  We got to hear a big band that was outstanding.  I just love big band music.  They did several jazzy Christmas selections as well as some standard big band songs.  We all really enjoyed it. As a bonus, we ran into the Colsons, old neighbors from Richland, Washington who are serving a mission in Washington DC. it was good to see them.  We had a nice time visiting with Will in the car as well.   It will be our last trip to the Festival of Lights.  We sure have enjoyed that program at the temple.  The beautiful lights, wonderful music, and friendly crowds of people really have been a special Christmas treat.
Posted by Dan and Lezlie Couch at 6:39 PM